The Critical Specimen Containment Wing at the National Microbiology Laboratory has been breached! Microorganisms seem to communicate with a mysterious force and multiply uncontrollably!

You have been tasked to control the breach, and eliminate the microorganisms. You are given a variety of powerful cellular deconstruction weapons. But be careful not to exterminate all specimens, you must leave ONLY ONE of them alive at the end of each round!

Please enjoy in Fullscreen mode. Technically playable on mobile, but a PC gives the best experience.

The music and the graphics are really nice :) However, I was stuck at level 3... having the cells mythose ~2 times each 15 seconds before the end is a bit nasty haha.

Antoine from the game Corridor.

I had problems when the microbes were out of range of the bullets, at the bottom and top margin,  and sudden large burst of multiplication at the end seconds may have been avoided.

Awesome game, I didn't feel feel bored for a second. I really liked the progression with the gun types, each of them presents a unique mechanism, instead of just shooting faster or more bullets. The sound effects are simple but give it a nice comic vibe.

Not sure how to shoot stuff at the edge. stuck at level 3 dying 3 times in a row. is there any mechanics or strategies that i have missed?

Was quite hooked to its art though, just not sure how to play well at it

Each weapon has weaknesses, edges being the weakness for the rifles. It's a good idea to keep slow moving organisms from approaching the edges, especially if the threat level is lower.

Level 3 seems to be a minor difficulty spike - but If you stick it out it gets more interesting, and not necessarily harder.

The specimen will keep circling around and you just have to wait until they loop back inside your shooting range. At first it seems like a flaw, but it makes the game more challenging.

the point is they always (3 times in a row) split into the void without enough time for me to even start shooting them
One split to the top void and the other to the bottom. Tried very hard to herd them, even tried not killing all right when it starts. Still had to stare at the 2 cells till the end of level 3

Ok got pass it this time. Guess i just had a bad roll at the dice

Really quite like this one. Feel's like it does something interesting with the theme rather than just making an awkward control scheme.

RN though, I think it falls slightly short of achieving it's potential by adhering to the theme. As is, it's not really much more than a standard "shoot all the dudes" schmup. The core mechanic only really vaguely comes into play at the end of each round, and at that point, since they don't seem to multiply then, there's not really any interesting challenge to it.

I'd love to see what happens if you ditch the theme, and instead have the player try to balance the number of blobs between two numbers. You could probably still have them stop multiplying at the end w/o removing the challenge, though a visual indicator would be nice like them freezing up.

Finally, not really sure about the dialogue, it doesn't seem to have much focus and just feels like arbitrary exposition, which makes me question why it even needs to be there if it's not focused on. At least make it skippable/add indicators of how to skip it. 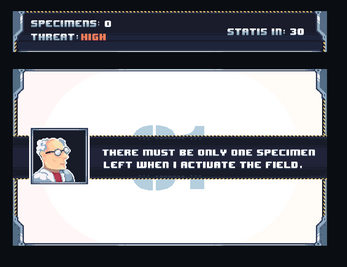 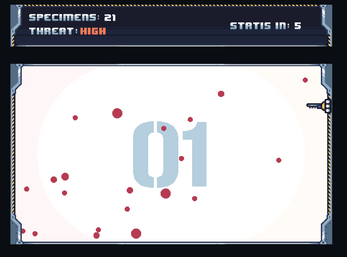 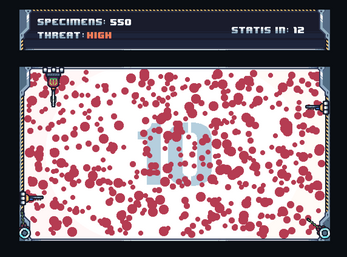 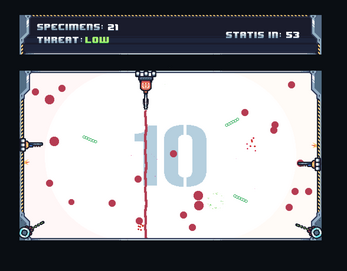